The paprika spice proves the saying: “don't be fooled by appearances”. Made from chili pepper, paprika retains the warmth of the fruit with restraint, to deliver soft and subtle spicy aromas. It is of American origin and comes from the drying and molding of ripe chili pepper, whose flavors remain sweet and subtle. Of a powerful red color, it is sometimes used as an ornament in the decoration of dishes.

How is Paprika made?

We love how intensely red this spice is. It comes from the drying and molding of ripe peppers, fruits of the plant of the same name, belonging to the Solanaceae family. Its characteristic color also gives it the name of red pepper, but despite its color, the power of its flavors is found in its sweetness and subtlety. From sweet to spicy, to sweet and sour, the varieties of paprika are distinguished according to the different parts of the plant used for their manufacture.

Thus, the highest quality is made from the fruit, stems, and seeds, while the common paprika spice is exclusively composed of fruits. To make paprika it, just grind the seeds, which concentrate the maximum power. In order to know its intensity of taste, it is enough to observe its color, because the more dark tones are present, the more it is supposed to be soft.

Derived from the Serbian term paprena meaning "the one who stings", the aromatic plant has its origin in America, from where the plant was imported by Europeans in the 15th century. Today paprika is grown all over the world, both in Spain (the largest consumer) and in Hungary, where its quality is recognized as first class. While pepper could be particularly expensive, paprika was accessible to the majority of the population, which enabled it to experience great success in cuisines around the world.

If the spice is only commercially available as a powder, be aware that it does not retain all of its aromas. Therefore, it is better to get it in small quantities, in order to cook with a quality product. Paprika will be stored better in an airtight container in the refrigerator, rather than in the open, even if it is protected from light.

How to use paprika

Ideal for adding flavor to the dish without taking advantage of the chili fire, the paprika has a sweet taste, with bitter notes whose aromas do not denature the entire preparation. With a subtle sweetness, its fragrance fits into any kitchen, even if it remains a symbol of Hungarian gastronomy by decorating the famous goulash. Do not hesitate to use and abuse it in dishes based on meat, poultry or fish, instead of pepper, for example. You can season a dish of pasta, rice or vegetables to avoid bland food.

If you cook a meal for too long, this spice may have a bitter flavor due to excess heat; prefer a last-minute seasoning to keep the sweetness of the spice. It also creates a sensation with cheese and cream, or in sauces such as curry, béchamel, and guacamole. Bringing a touch of color to red tones, paprika is sometimes only used as an ornament on “canapés” as an aperitif, especially in France or as a decoration for soups like the Moroccan beans soup called “loubia”.

What are the health benefits of paprika?

Here are some good reasons, in addition to its taste properties, to buy paprika.

There are different types of paprika on the market. Whether sweet, strong or smoky, its color and more or less pronounced flavor vary according to the varieties of peppers and red peppers used. For example, the smoked sweet paprika from Spain, which brings a natural "smoky" note to our dishes, is made from a chili pepper called peppers. Some blends also include hot peppers to give a little more intensity and flavor.

The warmth and strength of paprika will vary depending on whether you grind only the flesh, the pulpit and the stem, its heart and its seeds. The more seeds in the grind, the stronger the paprika. You should also know that paprika is a spice very sensitive to heat and that it can burn quickly. It is, therefore, preferable to heat it very gently so as not to develop an unpleasant bitter taste. 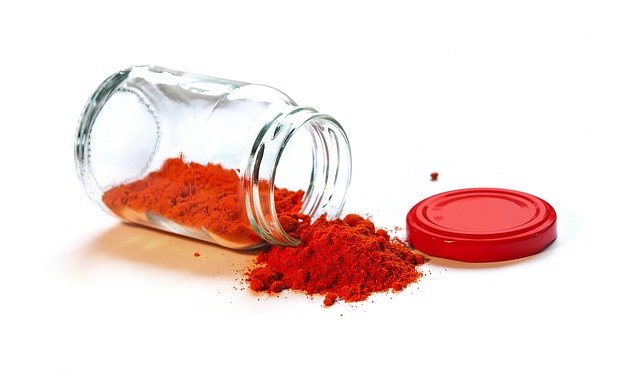 Paprika is an orange-red spice that is made from dried, crushed sweet red peppers. Available in sweet, smoked or spicy varieties, the sweet version is sweet to the tasteless large quantities are used, as in some Hungarian dishes. The flavor of the single spice is hard to imitate, but paprika can be replaced with various spices depending on the dimensions of the flavor you hope to gain. You can use:

Mulatto pepper is known for a licorice-like taste. Mulatto, a sweet pepper closely resembling an anchor - and sometimes used in combination with the anchor - can be found in the mole, a Mexican salted chocolate sauce. Heart-shaped, and black-brown, the mulatto flavor is compared to licorice. With its sweet and fruity taste, the mulatto substitutes of dried red pepper in more sensitive dishes like a sweet chili con carne.

Aleppo pepper is a Middle Eastern spice that is red in color, and spicier than sweet paprika, but it has a milder heat than cayenne pepper. A teaspoon of paprika can be replaced by 1 / 2-1 tsp. of Aleppo pepper, depending on the amount of spice preferred. The spice can be found in international grocery stores or online.

Chipotle powder is made from whole peppers that have been dried and then ground. The powder has a warm, smoky flavor that makes a good replacement for hot smoked paprika, to an equivalent extent. The chipotle powder can replace sweet paprika for a spicier effect in savory dishes.

For a more fragrant and flavorful taste of paprika, you can create your own version of paprika at home. Remove the stems from ripe red, yellow or orange peppers and place them in a dehydrator until the peppers are fragile. Otherwise, dry the sliced peppers on a baking sheet in an oven at 120 ° F until they are completely dried. Place the dried peppers in a cotton bag, and rub the peppers against the sides to grind them. Larger bits can be placed in a small grinder crusher, then sieved before use. This homemade paprika is tastier than most store-bought varieties.

One of several varieties of Spanish paprika or smoked paprika - also called pimenton - is constant chili peppers dried over a wood fire. Although less intense than the types of Hungarian paprika, smoked paprika still provides a rich, woody flavor that no other paprika matches exactly. If you're cooking a dish that calls for smoked paprika and you don't have one, try one of these substitutes to best match the unique flavor of Spanish smoked paprika.

Chipotle peppers can also be purchased canned in a red sauce called "adobo". Combined with the smoky flavors of the peppers, the sauce adds a little sweetness and lots of spices. To most closely match the flavor of smoked paprika, use only the peppers from the can - which have been marinated in the sauce and will retain some of the flavors - and use, chopped, double the amount that is called smoked paprika.

Ordinary paprika, marked only "sweet paprika" when sold in grocery stores, is not specific to any part of the world. Its flavor, unlike paprika with more specific names, is generally not strong in terms of warmth or sweetness. This regular type of paprika mixed with cumin - another ground spice with an overall smoky flavor - makes a suitable substitute for smoked paprika. In case of replacement, use two parts paprika with one cumin part of the total amount of smoked paprika requested in the recipe.

Hungarian paprika has a richer, more intense flavor than plain or Spanish paprika. It has eight varieties, but the spice sold as "Hungarian paprika" in the United States has the flavor of red pepper and is a bit spicy. Depending on the method of cooking your meal, as with grilling, the smoke flavor can add itself without the addition of another spice. A pinch of cayenne pepper adds warmth to the substitution. These two spices should make a great substitute for smoked paprika in your recipes.

The paprika allows you to highlight your dishes with a fragrant touch and a spicy according to your taste. It goes very well with gravy dishes such as goulash (Hungarian soups), and also on eggs, vegetables, poultry, sauces, fish, tomatoes, onions, avocado ... a white cheese sauce and a few spoons of paprika will accompany raw vegetables and white meats. To color and flavor Moroccan tajines and mixed salads.

Considered one of the most versatile peppers, ancho is the dehydrated version of the poblano pepper. Anchos Known for its mildness and low temperature, ancho or dried chili powder can replace dried red peppers or hot paprika in spicy meat dishes, including rubbed chicken and traditional Mexican dishes such as chilaquiles. Wear gloves to avoid skin irritation when handling fresh peppers.

Cayenne pepper is made from the ground, dried red peppers. Cayenne pepper is red in color and can replace sweet paprika for a spicier result. Hot smoked paprika is very spicy, and the cayenne pepper ground can mimic that heat when used as a replacement, although the smoked flavor will be lost. Half a spoon of ground cayenne pepper can replace 1 tsp. paprika. If you are hoping to keep the sweet taste of paprika in the recipe, add a pinch of sugar with the pepper.

The most widely used pepper in the West is black pepper, which, the ground at the last minute, makes almost any dish. It is considered the most aromatic but does not support prolonged heat. It is, therefore, better to add it at the very end of cooking. To get the maximum flavor, buy the peppercorns and grind them before use. Whole black pepper can be stored almost indefinitely at room temperature. Don't hesitate to also incorporate it into sweet dishes and fruits: Guaranteed enhancement!

If you have run out of paprika, you can easily find other substitutes in your kitchen. Chipotle, cayenne pepper or ancho are good examples. Keep in mind that you should choose substitutes according to how strong you want the taste of your dish to be, its sweetness level and if you want a smoky taste or not. Feel free to combine more than one paprika substitute to reach the desired taste and make sure to use the right amount.