The demand for hot chili peppers is growing slowly but surely, but people are also getting fussier about the amount of heat used in their dishes. Like the hot habanero and the sriracha, the Serrano pepper is another extremely popular type of chili that truly lights up your taste buds. Serrano peppers are currently in high demand, especially in Mexican cuisines.

Generally, we can thank Serrano peppers for that famous spice we enjoy in Mexican dishes. So what if our Mexican cuisine chefs run out of this chili?  Would you like a Mexican dish without that famous fiery kick?

Of course, we’re not going to run out of Serrano peppers any time soon, but even if we did, there are plenty of delicious alternatives that could come to the rescue. It is true that Serrano peppers can be surprisingly tough to find in certain areas, but there are always other options if you can’t find any in your local store.

However, some of you will be wondering why we’re making such a fuss over a chili, so before we discuss its substitutes, let’s dive in and find out what makes Serrano peppers such a staple in Mexican cuisine.

What are Serrano Peppers? 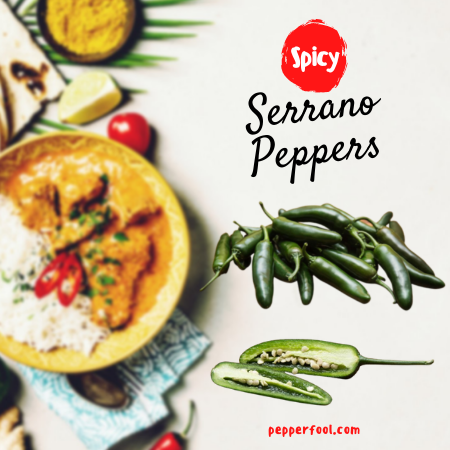 The Serrano pepper first originated from the Mexican states of Puebla and Hidalgo and are named after the mountains (also known as sierras) in these regions.

Without Serrano peppers, Mexican food is incomplete. They are extremely hot chili peppers that require gloves to be handled. Serrano peppers are petite hot green chilis which turn red or yellow when they age.

They tend to have thin, soft skin that does not need to be peeled off typically and let us not forget their prevailing heat. While they are highly regarded for their flavor, it’s their heat that really makes them stand out.

Despite their size, they are three times hotter than a hot habanero, but still ten times less hot than the hottest habanero. In terms of the Scoville Scale, Serranos come in at around 8,000-23,000 SHU which is not just hot but very hot indeed.

These spicy peppers are not only famous in Mexico, but commonly used in South Asian cuisines as well. Be it salsas, guacamole, relishes, garnishes, any popular Mexican dish or even to make a hot sauce, Serrano peppers are sure to bring a tantalizingly spicy kick to your dishes.

But if you run out of them or cannot find them in your local grocery stores, there are always other delicious alternatives, many of which are far easier to get hold of, to bring the heat. 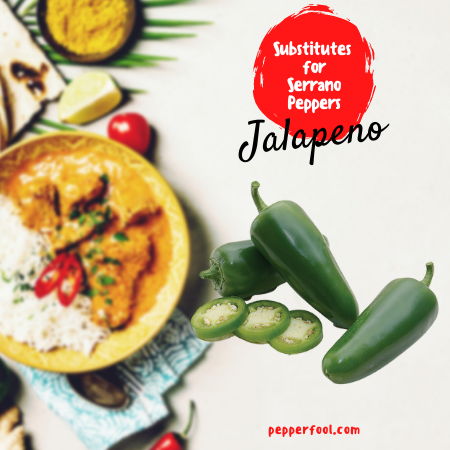 If you are planning to keep that same level of heat in your dish then jalapenos are your best bet to substitute the dynamic flavors and fiery kick of Serrano peppers. And another great thing about jalapenos is that they are available everywhere.

Your pantry may not have Serrano peppers but most of us will have jalapenos in every now and then. Although jalapenos are milder in terms of heat with a Scoville heat of 2500-8000 SHU you can still make your dish hotter by increasing the number of jalapenos the recipe calls for. 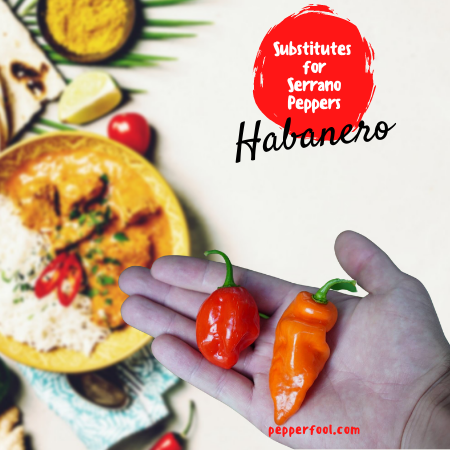 If you thought Serrano peppers were the hot, just wait until you get your hands on a habanero. The heat of the Serrano pepper is nowhere near the habanero, whose Scoville heat unit is 35 to 178 times hotter than the famous jalapeno, with a whopping 300,000-450,000 SHU.

Some habaneros can even have a Scoville heat up to 600,000 SHU. The mighty habanero has a unique flavor unlike that of any other pepper.

They have a slightly citrusy and resonant flavor to them with a hint of floral fragrance, and they are popularly used for making hot sauces and other super spicy dishes we know and love. 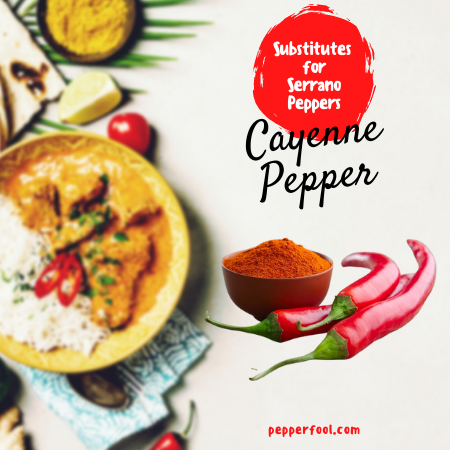 Cayenne peppers may be harder to come by than jalapenos, but they make a great substitute to match the heat level of the Serrano peppers (although they’re not quite as hot as the Serrano).

They are somewhat similar to bell peppers and jalapenos and belong to the same family.

Widely used in Cajun dishes, cayenne peppers also have a variety of other uses, such as making hot sauces, salsas, and they can be pickled or dried.

Cayenne peppers have a Scoville heat of about 30,000-50,000 SHU. You’ll usually find cayenne pepper in a powdered form, which is also a great substitute if you’re looking for a quick and easy spicy kick. 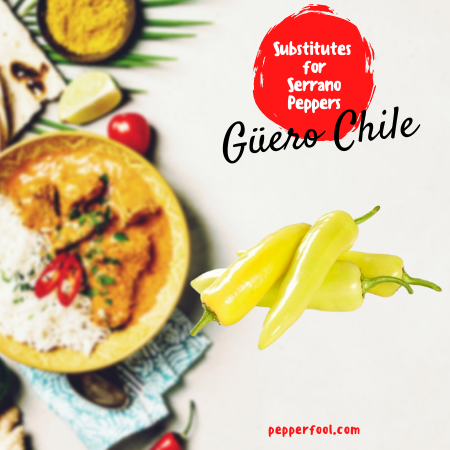 In the Southeast of Mexico, they are also referred to as “Ixcatic” or “Xcatic” and in the Southwest of America, they are known as the Santa Fe Grande pepper.

They tend to have a pale greenish or pale yellow color to their skin and have a triangular shape to them with wide shoulders and elongated points.

In terms of flavor, they are somewhat subtler than your typical jalapeno. They are slightly sweet but bold in flavor and crunchy in terms of texture. They have a Scoville heat of 500-700 SHU. 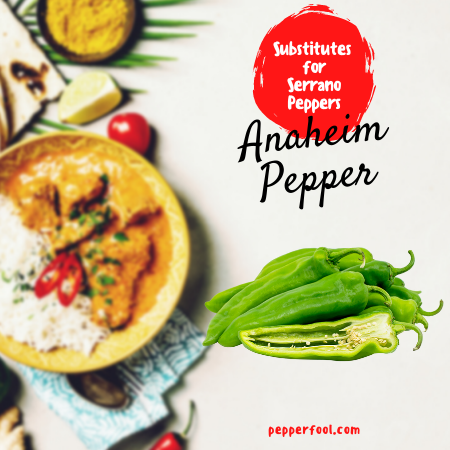 With a Scoville heat of 500-2,500 SHU, the Anaheim peppers are definitely hotter than the Güero chiles and are among the most familiar chili peppers to the US and can be found in many common foods and dishes.

In terms of flavor, they tend to be on the milder side and can be compared to the flavor of a mild jalapeno. 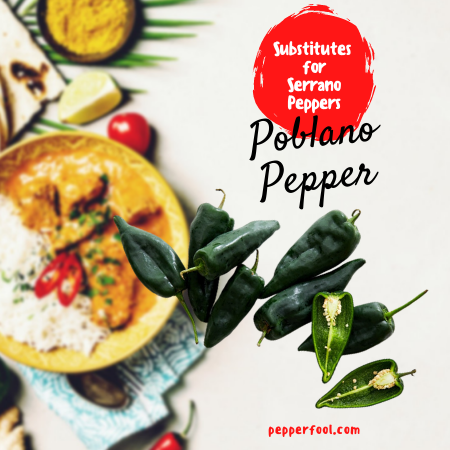 Looking for better options to replace the flavor of Serrano pepper? Pablano peppers will surely get the job done. You may have to use a higher quantity than you would with Serranos, but you don’t have to worry about them upsetting your stomach.

They are very mild in flavor with a Scoville of 1,000-2,000 SHU. They tend to be larger than bell peppers but are little thinner and have a spikey tip like that of jalapenos. Unlike other chili peppers, Poblano peppers are green in color. Sometimes dried versions are sold, known as ancho chili peppers. 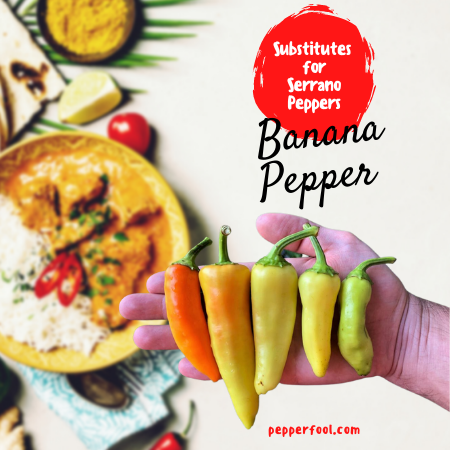 With a Scoville of 0-500 SHU, the banana peppers are very mild peppers with a tangy touch and sweetness to them. They tend to look like a tropical fruit with a curve shape that makes them look like a banana.

They are also green in color and when they are matured, they naturally take on a greenish-yellow or sometimes full yellow color making them look like a banana (hence the name). However, they can also turn orange or even red as they develop. As they are milder in terms of flavor, they need to be used in large quantities if you want to recreate the spiciness of Serranos. 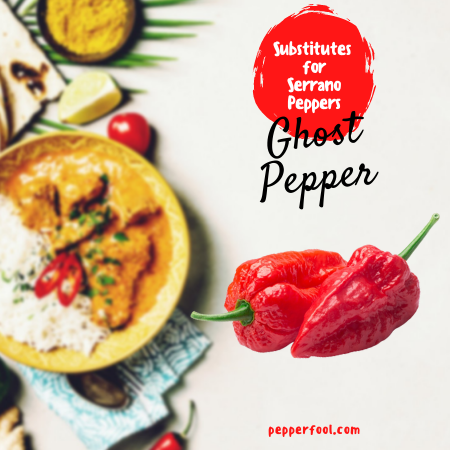 This pepper is one of the hottest out there and even exceeded the heat level of the hot Serrano peppers. Famous for being the first pepper to break the 1,000,000 SHU limit of the Scoville scale, it ranks among the hottest in the world.

It is also known as Bhut Jolokia, Naga Hari, Raja Mircha and was first introduced by the Bhutias people, which literally translates to “ghost” in India. 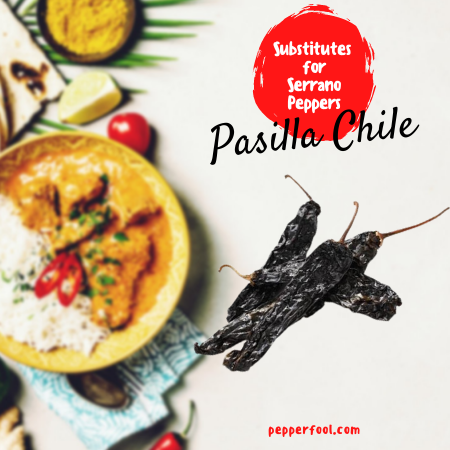 The Pasilla chili is another pepper that can compete with the heat level of the Serrano (albeit only when used in larger quantities) and has a heat profile identical to that of the Poblano pepper.

When fresh, these peppers are known as Chilaca chilis and when dried they are called Pasilla Chiles, Pasilla Negro or Chile Negro, as their skin becomes dark and crinkly like that of a prune. They have a heat of about 250-3,999 SHU. 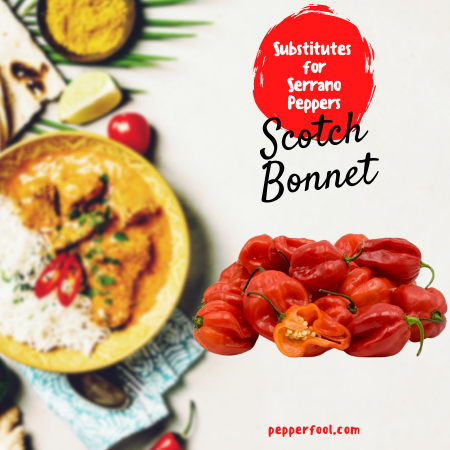 Also referred to as the Bahama Mama, the Bahamian, the Jamaican Hot, the Martinique Pepper, Bonney Peppers, Boabs Bonnet, Scotty Bons, or at times the Caribbean Red Peppers, this pepper is the best part of Jamaican cuisine.

This chili has been said to resemble a Scotsman’s bonnet, or even a Tam O’ Shanter hat, which is where it got its name. With a Scoville heat of about 100,000 – 350,000 SHU their heat level equally matches with that of the Serrano peppers. 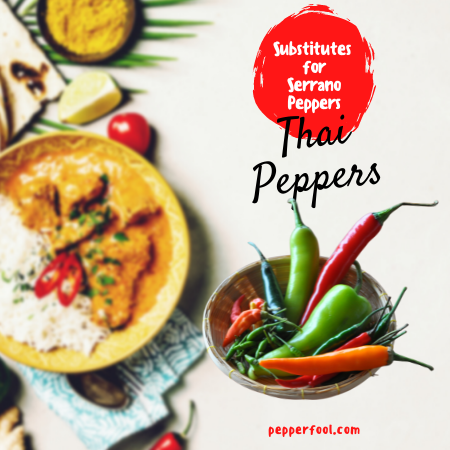 They are also sometimes known as the Bird’s Eye Chili and occasionally referred to as Thai dragon peppers (for their heat level matching to a dragon's breath and their shape being like that of a dragon’s claw), the African Devil and Congo Chilies and many more in different regions. 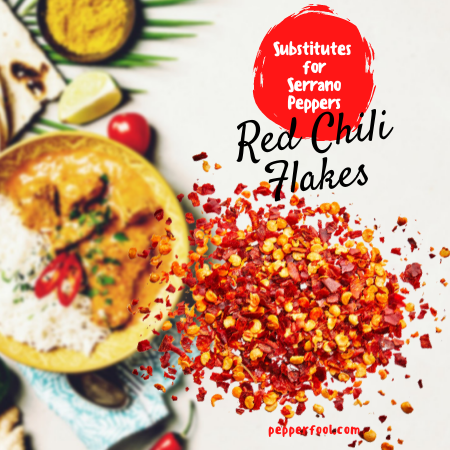 Another great way to bring up the heat in your recipe is to get ahold of some red chili flakes from your nearby superstore or simply make them from scratch at home.

It is pretty simple. But there will always be a tiny glass or plastic jar packed with crushed red pepper flakes in any store without a doubt. They have all the peppers you need to spice up your recipe.

These miniature jars of flakes are made from an assortment of peppers, more specifically peppers from the capsicum annum family. These are none other than flakes made from dried crushed jalapeño, Fresno bell, Anaheim peppers and let us not forget the famous cayenne pepper.

Most of the red chili flakes that we see contain a majority of cayenne pepper but the proportion varies from brand to brand. 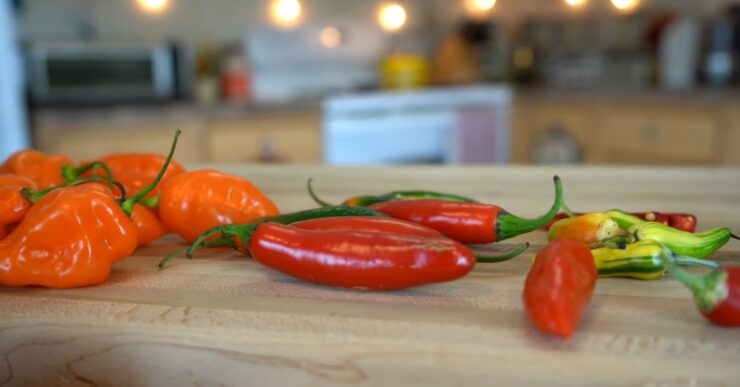 While handling these hot peppers you must remember that they can be extremely hot and must be handled with caution. You must use gloves at all times, whether you’re working with jalapenos, Serrano peppers or the hottest ghost peppers.

If you don’t use gloves imagine wiping your eyes or nose after handling your piping hot peppers – the aftermath won’t be so good. Also, you must be extra careful if you have any open cuts on your skin or if your skin is extra sensitive.

In such cases, wearing gloves is mandatory. Even if you don’t have any cuts, make sure you wash your hands thoroughly afterwards.

While this list gives you a good idea of the heat level of each pepper, it is still better to have extensive knowledge about them to have a clear idea of what you are dealing with if you decide to put them in your recipe. Peppers can vary widely in heat and may be hotter or milder than the estimates given here. It’s always better to be safe than sorry, and no one wants to end up with an upset stomach.